Today I’m visiting with author Jeff Chapman. I had the honor of recently reading Jeff’s latest book, Last Request, a Victorian Gothic. (Click here to read my review of it!). Jeff has a unique style, and definitely knows how to create a story full of suspense and excitement! Hope you enjoy getting to know him better!

Welcome to Finding the True Fairy Tale, Jeff!  Can you tell us a little about yourself … hobbies, quirks, tastes, interests, passions?

I make a living writing software, feed my soul with great books, and express myself writing fiction. I love to watch mysteries and costume dramas on PBS. I have graduate degrees in history and computer science. I fell in love with words and story reading Poe. The first fantasy I read was The Chronicles of Narnia. Somewhere in my teens I discovered Dostoevsky and Kafka. My favorite C. S. Lewis book is Till We Have Faces. My favorite Tolkien book is The Children of Hurin. Not sure why my tastes run so dark. I listen to U2, Loreena McKennitt, Natalie Merchant, and Mazzy Star. I build my own bookcases. I don’t like candy and I don’t like soda, but I am very passionate about dark hot chocolate.

You write science fiction, fantasy and horror … is there a genre you haven’t written in which attracts you? Do you see yourself ever writing in that genre?

Six months ago I would have said historical fiction but Last Request is historical. I like mysteries, but I don’t think I could come up with all the clever plot twists to write a good one. I have a thriller novella with a publisher. I definitely plan to write more historical fiction and if the thriller works out, maybe I’ll write some more of those. My base is definitely in fantasy and horror. Those two elements creep into every story.

Tell us about your road to publication.

I started writing for my own amusement as a teenager. I took some fiction writing classes at university and tried to publish some

stories. I didn’t meet with any success. I kept reading fiction and toyed around with writing but I wasn’t serious about it. I shelved the dream of being a writer, thinking I would get to it someday. A serious illness shocked me back to reality. I’m going to die someday and it might not be on my schedule. Becoming a parent gave me a new sense of maturity. So with my new sense of maturity and mortality, I decided I had to become serious about my writing dream. I began writing every day, joined critique groups, and delved into books on the craft of fiction. I made my first sale in 2009.

Do you remember the first story/book/poem/etc. that you wrote … ever? (Or if not the first, one of the first!). What was its title? How old were you when you wrote it? If you were to read it now, what would you think or feel about it?

I remember writing some stories in sixth grade. My teacher gave me good grades for them, but I was way too shy to volunteer to read them out loud to the class. One was about a guy on a whaling ship. Another was about a guy who crash lands a glider on a mountain. I think they were highly derivative.

Esme from “Esme’s Amulet” was very fun. She tries to be clever and quickly gets in way over her head, but she never gives up. She’s going to have her own novel some day. The most difficult is from a work in progress, a weird Western about a murder committed during the Civil War. The hard part is how to resolve the protagonist’s guilt. I’ve written three different endings to that story and haven’t liked any of them.

If you could get lost inside of a book, and become one of its characters, which book would you choose?

Definitely not any George R. R. Martin novels. I want to survive the story. I would be content to tag along with Ransom in Perelandra, so I could visit the astounding planet Venus as Lewis imagined it.

Your latest story, Last Request, is a Victorian Gothic. What made you decide to write this particular type of story? Is it something you’ve always been interested in? Or did you get a sudden spark of inspiration from somewhere?

I saw a reference once to a crypt in which the future occupant had placed a bell that could be wrung from inside in case of a premature burial. Premature burials are also a frequent theme in Poe’s work. I’m a bit claustrophobic. Nothing terrifies me more than the thought of being buried alive. I thought about what someone might do to make certain they were dead and cutting off the head came to mind. The story wouldn’t work as well now with most people being embalmed so I chose a Victorian setting. I’ve read a lot of nineteenth-century novels. The rest of the story flowed from the setting and the initial problem –an aging claustrophobe asking his relatives to cut off his head postmortem, just to make sure he’s dead.

If you had to describe yourself in three words, what would they be?

Tall, dark, and handsome, of course. Okay, above-average-height, quiet, and creative might be closer to the mark. 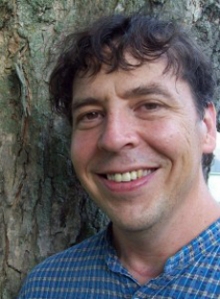 Jeff Chapman writes software by day and speculative fiction when he should be sleeping. His tales range from fantasy to horror and they don’t all end badly. He lives with his wife, children, and cats in a house with more books than bookshelf space. You can find him musing about words and fiction at jeffchapmanwriter.blogspot.com.