Though Robin Williams was never a favorite actor or comedian of mine, there are certain roles I will always remember him for, a handful of which are set in worlds of fantasy or fairy tale.

I grew up watching the movie Hook, based around the story of Peter Pan.

Another favorite of mine growing up was Aladdin – and much of the reason it was a favorite was because of Genie, I must say. 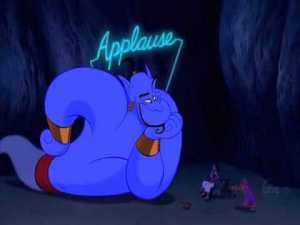 Only a year or two ago did my husband and I discover Shelley Duvall’s Faerie Tale Theatre at our local library, and I was stunned at all the appearances of famous actors and actresses before their prime. Robin Williams was one of them in his role as the Frog Prince. Corny those shows may have been … but no less endearing for that! If you haven’t watched them, you definitely should!

Were you a Robin Williams fan? In what movie or role did you like him best?

11 thoughts on “The Fairy Tales of Robin Williams”