Well, my friends, I am feeling a strange mixture of utter relief and tension right now. It’s the feeling that comes when a first draft is finished (relief), and edits loom large (tension) ….

Yes, you heard me. Mere minutes ago I typed the last sentence of my book. It is the second of a series I am working on (I finished the first draft of the first book earlier this year). It’s a thrilling feeling, to say the least! Especially as this is a bigger undertaking than I’ve ever tackled before. From a girl who has written only standalones, a series is a daunting task. As of now I have written the first two books, and have many plans and ideas for the third book, although it may be a while before I begin officially working on it.

What, you ask, are these books about? Well, I’m always a bit reluctant to say much about my WIPs while they are still in first-draft form – even to my own family! But I will give you a few clues.

Firstly, there are dragons. And anyone who knows me knows how much I adore dragons. I’ve longed to put them in a book for many years, but 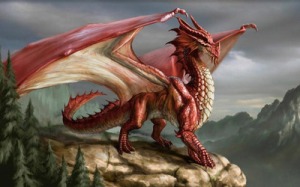 hadn’t found the right story for them until now. And I’m so excited about them, although to be honest, a little nervous about how I’ve pulled it off …!

Secondly, and probably obviously, these books are of the Christian fantasy genre, just as The Word Changers was. There is an element of allegory, an element of mystery, a great deal of adventure and intrigue and danger, and a bit of romance.

Thirdly, these books are told from multiple points of view. There are two protagonists – one is a male and one is a female. The story is told alternately from their viewpoints, something else I’ve wanted to do for a long time but didn’t quite have the courage for. The male viewpoint was a difficult one, and when I’m editing I’m sure I will have to sharpen his voice and think many manly thoughts in order to get it just right …! Perhaps some of the men in my life will be willing to read the book and offer their wisdom! 😉 😉

I am giving myself a week or two off before I begin edits. And by “off,” I mean that I will probably just tackle another writing project while I wait.  A short story, perhaps … or maybe a brand new book. I’ve got ideas for both of those things rattling around in my brain right now, so we’ll see.

So thanks to those who prayed for me and encouraged me as I struggled through the ending of this book (you know who you are!), and to those of you who I pray get to read these labors sometime in the distant future. I truly couldn’t do it without you, or without God, the true Author of all our stories.

Have a blessed weekend!

13 thoughts on “First Drafts and Dragons”