You may remember the review I wrote on Nathan Lumbatis’ spectacular new book, Daniel and the Sun Sword. Well, today I feel very privileged to be featuring a video interview between Nathan and the antagonist of his exciting story. You’ll really want to see this . . . it made me smile 🙂

Thirteen-year-old Daniel is about to be adopted. But when he learns his new family wants him as a slave, he runs away with the help of his new 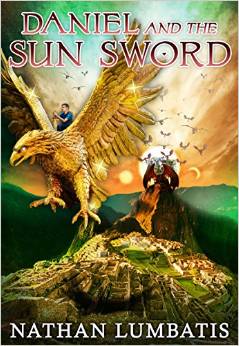 neighbors, the naïve and cowardly Ben, and Raylin, a mysterious girl with a shady past.

He begins to second-guess his decision when the cave they hide in transports them to the ruins of Machu Picchu, where they find themselves embroiled in a battle between ancient gods of Life and Death. To top things off, the God of Life draws Daniel into the fray by adopting him as his son and setting him on a quest to complete a broken, mystical sword, a task that will pit him against the god of the underworld.

Now, Daniel and his friends have just one weekend to find the shards before a hoard of supernatural enemies catch up. But that’s not all they face. A trap has been set that even Daniel wouldn’t expect, and he just took the bait.

Will the power of his Heavenly Father be enough to save them?

INTERVIEW WITH A VILLAIN

FIND OUT MORE ABOUT THE AUTHOR HERE

2 thoughts on “Literary Losers – Interview with a Villain”