I am hosting authoress Shannon McDermott here today in an interview through Prism Book Tours. Shannon answers some questions about her new book, The Valley of Decision, her writing process, and a bit about what she does in her spare time! Thanks for joining us and hope you enjoy visiting with Shannon for a while!

If you scroll down (wwaaayy down there!) you’ll find more info about Shannon and her new book, and also links to all the other sites involved in this fun book tour!

Also Shannon has two (yep, two!) giveaways going on now, which are also at the bottom of this post. Up for grabs are two paperbacks and an eBook of The Valley of Decision, an eBook of Shannon’s book The Sunrise Windows, and … a $25 Amazon gift card! You will definitely NOT want to miss out on entering!

Without further ado, here’s the interview!

What do you do when you’re not writing?

On the professional side, I have a good deal of book promotion to do – both my own and other people’s. On the personal side – reading, music, family …

Why are you drawn to the Christian fantasy genre?

Fantasy in general appeals to me because I enjoy the incredible imagination displayed in stories filled with things we wouldn’t dream of encountering ourselves. I am also fascinated by the fact that whatever matters most in our own world – love, courage, hope, the ultimate nature of reality – is what matters most in every world we can imagine. Christian fantasy, when done well, is a fuller and more satisfying exploration of that truth than fantasy that discounts God.

Which of the characters from The Valley of Decision was your favorite to write?

The main character, Keiran the Captain of the Hosts. To even attempt what he did, a person would have to be either very desperate or very confident of his own abilities. Keiran is the second, and he has an extreme self-assurance, and sometimes conceit, that I enjoyed using. He’s also bold, another fun characteristic for a writer to work with. And because he is a very able man, and has reason to be confident, his occasional conceit adds texture to his character and makes him more interesting.

Tell us a bit about your writing style. Plotter or pantster? Music or silence? Office or coffee shop?

I usually do office, but occasionally I’ll go to my local library, buy a drink from its coffee shop (every library should have a coffee shop), and settle down in a quiet nook to work. I also like music while I work, particularly Andrew Peterson or Celtic Thunder or Caedmon’s Call.

I always do some plotting before I write (how can I tell a story when I don’t know where it’s going?), but it can be pretty sketchy. When I start a book, I have the premise down, a plan for the first few chapters, and a few ideas I want to incorporate. Then, throughout the writing of the book, I stop to do more plotting. I never write a scene without notes on what it is meant to accomplish in the story as a whole.

Were there any unforeseen challenges in the writing and publication of your book?

Well, the printing press broke down while they were printing the book. But that isn’t a sign, not at all …

If the main character of The Valley of Decision lived in the modern world, what would be his/her choice of career?

That’s a fun question! I never thought of it before, but I think he’d be a Fortune 500 CEO – totally dominating his industry, buying up smaller companies, engaging in multimillion-dollar transactions over coffee. And he wouldn’t be interested in the money so much as the challenge and the game.

We’d like to introduce you to the characters and the story-book world of The Valley of Decision. From the races that inhabit the world (Trow, Fays, hobgoblins, Men) to the different nations (Alamir, the Coldlands, the Dochraitay) to the places (the Northwood, the Black Mountains, Ataroth), there is a lot to explore! Come follow along:

6/24
The Wonderings of One Person
The Written Adventure 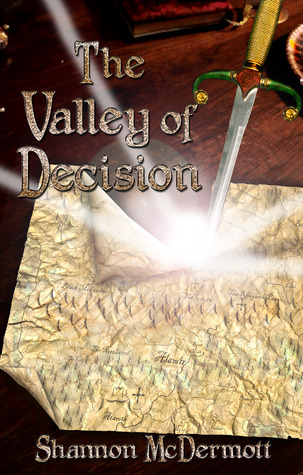 Where the Black Mountains pierce the sky, they divide the south from the north, Alamir from the kingdom of Belenus. Belenus, the undying master of the north, commanded Keiran – the Captain of the Hosts – to conquer Alamir. But the Captain is deep in conspiracy, and he has his own plans.

The Valley of Decision is a fantasy novel, a saga of slavery, freedom, and choices.

Introduction to The Valley of Decision

When I began researching folktales in order to write The Valley of Decision, I gave particular attention to the elves. Fairies, they’re also called, or faeries or fays. By whatever name, what are they?

That was the question I tried to answer, and my trouble was that I found too many answers. Elves, or faeries, might be almost anything: good or bad, ugly or beautiful, large or small, living in hills or mountains or forests.

Their origins were also diverse. Some said the faeries were fallen angels (demons?), others that they were the spirits of the dead (creepy!). One story has it that when the first baby laughed for the first time, that laugh shattered into a thousand pieces and became the fairies – quite charming, actually. Another story holds that Eve once hid some of her children from God, and He declared to her, “What man hides from God, God will hide from man.” These children and their descendants became the Hidden People, the elves.

Tolkien presented his Elves as a distinct race, neither angelic nor human in origin. Disney, not surprisingly, dusted off the baby’s laugh story for its fairies. Meanwhile, Darby O’Gill and the Good People – published more than a century ago – adopted the fallen-angel theory, with a few modifications. (The angel Gabriel has a starring role in the tale, with an Irish brogue and several politically incorrect opinions.)

When it came to writing my own story, I had to craft my own rendition of the ancient legend of Faeries. To put it simply, I had to decide who and what they were.

I picked the name Fay and adopted and revised one of the old tales. The story I created for the Fays became the most important element of the entire mythos of The Valley of Decision. It came to determine who they were, and what they did, and how they treated the humans who were, after all, the heroes of the story.

Shannon McDermott is a Christian author of speculative fiction, as well as a humorous detective series called “The Adventures of Christian Holmes.” She has written both fantasy and science fiction, and has yet to decide on which one to like better.

She was born to Wisconsin, expatriates in California, grew up on the East Coast, and now lives in the Midwest. Her principal hobbies are politics, history, novels, and coffee.

10 thoughts on “Interview with Shannon McDermott, Author of THE VALLEY OF DECISION”